Trina Solar told Solar Daily that it has commissioned a pilot line for the mass production of the 500W+ Duomax V and Tallmax V (“V series”) modules. The event marks another milestone achieved by the company this year after the global launch of the V series on February 27.

To address the new challenges, the company and its partners, at the initiative of Trina Solar, jointly developed several industry firsts: a high-speed non-destructive cutting technology, uniform welding for multi-busbar solar modules made of 210mm cells, a new methodology for automated layout of solar panels as well as laminated welding equipment capable of handling mass production. These firsts, when integrated into the manufacturing process, help to achieve steady production.

Trina Solar vice general manager and executive vice president Yin Rongfang said, “The 500W+ V series modules are the result of many technological improvements to the manufacturing process undertaken over the last 20+ years combined with our accumulated experience in many aspects of the end-to-end process, including product integration and downstream systems. We are encouraged by the fact that the products have received wide attention and recognition from our industry colleagues, customers and media friends since their launch.

“The 500W+ V series modules not only bring us to a new breakthrough point for customer value maximization, but also inject a new driving force for value growth into the whole photovoltaic industry chain.

“The successful pilot line for the mass production of the 500W+ V series modules has laid a solid foundation for the capacity expansion to 5.5 GW this year, leading the global photovoltaic industry into the solar 5.0 era and a win-win market for ultra-high power modules.” 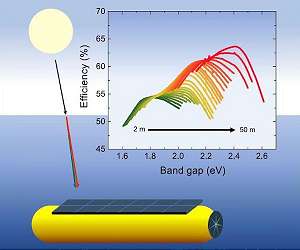 There may be many overlooked organic and inorganic materials that could be used to harness sunlight underwater and efficiently power autonomous submersible vehicles, report researchers at New York University. Their research, publishing March 18 in the journal Joule, develops guidelines for optimal band gap values at a range of watery depths, demonstrating that various wide-band gap semiconductors, rather than the narrow-band semiconductors used in traditional silicon solar cells, are best equipped for u … read more