Seasonal storage technology has the potential to become cost-effective long-term electricity storage system. This is one of the key findings of DNV GL’s latest research paper ‘The promise of seasonal storage’, which explores the viability of balancing yearly cycles in electricity demand and renewable energy generation with long-term storage technology.

As energy demand is increasingly electrified, for example through rising numbers of electric vehicles and in buildings, for space heating and cooling, this growing demand is largely being met by variable renewables, which increases the need for long-term storage solutions.

Based on a case study modeling electricity generation and demand for 58 different climate years, DNV GL’s researchers gained insight into the need and viability for the use of seasonal storage technology for electricity.

When assessing the use and business cases for this long-term storage technology, DNV GL’s researchers came to the following conclusions:

1/ The need for additional storage solutions is lower than expected and can be largely covered with available short-term storage technology such as battery storage systems.

2/ The growing number of electric vehicles in our transport system will provide most of the needed short-term energy storage to balance renewable energy in the power grid.

3/ The rise of synthetic fuels can provide a critical stepping-stone for the use of seasonal storage applications. Synthetic fuels enable CO2 heavy sectors to be decarbonized by creating hydrogen from low-priced (renewable-generated) electricity, which is then converted into e-fuels like ammonia. For the use case investigated, the long-term storage of electricity would become economically viable, especially in markets like Germany, where a vast amount of low-carbon electricity will be available in the coming decades.

4/ The price of seasonal storage, if based on compressed hydrogen, could become cost-competitive with alternative forms of long-term storage such as burning gas due to the growing incentivization of low-carbon technology. This price development is based on the expected increase of the carbon price from 25USD to 60USD per tonne CO2 by 2050 in Europe, according to DNV GL’s Energy Transition Outlook report.

The price of seasonal storage, if based on compressed hydrogen, could become cost-competitive with alternative forms of long-term storage such as burning gas due to the growing incentivization of low-carbon technology. This price development is based on the expected increase of the carbon price from 25USD to 60USD per tonne CO2 by 2050 in Europe, according to DNV GL’s Energy Transition Outlook report.

“As renewables take a larger share of the energy mix, new issues need to be addressed, such as meeting the increasing demand for electricity even when there is no wind or sun. Our research shows that seasonal storage provides a possible solution to address the problem of long periods without renewable generation, for example in the Northern European winter,” said Lucy Craig, Director of Technology and Innovation at DNV GL Energy.

“While the business case for seasonal storage is challenged by the rapid growth of grid-connected battery storage, our research shows that there is an opportunity for new technologies such as green hydrogen and synthetic fuels.”

Seasonal storage is a form of storage technology that typically charges during over-production of electricity from renewable energy sources during summer and discharges in winter when electricity demand is large and renewable electricity production, specifically solar PV, is low.

The full report can be downloaded here 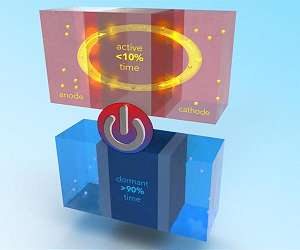 A lithium-ion battery that is safe, has high power and can last for 1 million miles has been developed by a team in Penn State’s Battery and Energy Storage Technology (BEST) Center. Electric vehicle batteries typically require a tradeoff between safety and energy density. If the battery has high energy and power density, which is required for uphill driving or merging on the freeway, then there is a chance the battery can catch fire or explode in the wrong conditions. But materials that have low e … read more