De-carbonizing the economies of the world is essential in the battle against climate change. Ofgem’s nine point de-carbonization program action sets out the regulator’s plans for the next 18 months and focuses on supporting the expansion of electric vehicles, creating a more flexible grid while addressing inaccurate labeling of products.

The CEO of Ofgem supported the UK’s efforts of de-carbonization. The regulator’s first point in the report looks at designing a cost effective network through new price control regulations that will be more adaptive.

Regulatory Uncertainty
There is regulatory uncertainty has damaged subsidy-free solar projects according to the Solar Trade Association (STA) and is a response of Ofgem’s de-carbonization plan. By issuing ten recommendations to the regulator, the STA said they should try to align the reform processes.

The Aurora Energy Research has found that the TCT could delay the onset of subsidy-free solar in the UK by as much as five years according to the energy comparison site MoneyPug, with Ofgem publishing its final decision on the TCT last year.

The STA said that it is not sufficiently clear and should have a long- term focus.as an 18-month framework is insufficient to provide the overarching and holistic approach toward de-carbonization that is necessary. Facilitating innovation is instrumental. It can not only enable commercial operation of existing assets connected to the grid, it could include subsidies.

The policy manager of the STA has said the plan omits several important details that relate renewables and energy storage. These are both critical to accelerate the deployment of solar energy-Ofgem needs to carefully consider how it will evolve as Britain’s power network becomes de-centralized.

Technologies that use a small amount of low carbon can do their part by tackling the sometimes significant barriers. These include grid connection difficulties, generation constraints, and disproportionate network charging.

Meanwhile the STA is calling on the government to provide Ofgem with a clear updated policy on de- caronization. They have also encouraged Ofgem to work with the Department of Business, Energy and Industrial Strategy (BEIS) to develop a flow for the Renewable Heat Incentive (RHI).

Greenwashing
One of the nine steps in Ofgem’s de-carbonization plan is to improve collaboration and planning in offshore energy transmission. The current usage of individual power connections for offshore windfarms are unlikely to be economical, sensible, or acceptable for consumers and a connected undersea network will make wind energy more efficient. The regulators will work with other bodies to remove barriers and facilitate the industry.

The Future
Ofgem’s action plan has the goal to reduce the UK’s net emissions to zero by 2050 and includes setting up a regulatory fund. Creating a flexible electricity system and making consumer benefits the focus of potential inconsistent electricity supply brought by the shift to renewables are equally significant and impending. Ofgem says companies in the field have to invest and anticipate their own needs ahead of time.

While regulators enforce price controls, which allow for the uncertainty of infrastructure investment, energy companies are proposing adjustments to them. Electric cars are expected to lead to a larger need for power, but the plan states the capability of energy storage and data to track usage and spare capacity will improve.

While Ofgem’s nine point plan tries to bring the United Kingdom’s carbon emissions down to zero within 30 years, there are many people who are concerned about the plan itself. It will be a challenge when it comes to zero emissions, the earnest effort is what matters the most.

If we work together, we can create a more sustainable world. You can help by supporting the people doing the work and doing that work yourself. There is no sure way to tackle this program, we need a comprehensive program that takes into account the many factors involved. However you view the regulator’s plan to de-carbonize the economy, it is an important step in a long road ahead that we all need to pay attention to and do our best to change. 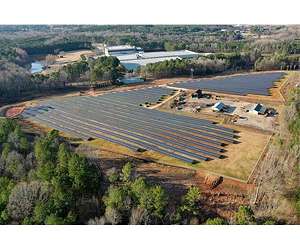 A 3MW solar photovoltaic (PV) project has been completed and commercialized by United Renewable Energy at Kimberly-Clark’s facility in LaGrange, Georgia. The project was the result of collaboration between Kimberly-Clark’s facility, United Renewable Energy LLC as the project developer and builder, and NextEra Energy Resources, LLC through a subsidiary, which is the long-term project owner. All of the output from the new solar facility, along with all the renewable energy credits (RECs) will be sol … read more