A solar-powered unmanned aircraft with a wingspan of 114 feet completed its maiden high-altitude flight in the stratosphere, maker BAE Systems said on Monday.

The plane, called PHASA-35, which stands for Persistent High altitude Solar Aircraft and its wingspan measured in meters, is meant to fly about 32 miles above the earth in the space, in the upper atmosphere between conventional aircraft and satellites.

The aircraft’s solar-powered batteries could allow it to stay aloft for over a year at a time, providing a stable platform for monitoring, surveillance, communications and security applications.

It can also offer military and commercial customers with capabilities not available from existing air and space platforms, and could be used in communications networks disaster relief and border protection at a fraction of the cost of satellites, BAE said in a statement.

The plane, which went from proof of capability to testing in only 20 months, is underwritten by Britain’s Science and Technology Laboratory and Australia’s Defense Science and Technology Group, and built by BAE Systems and its subsidiary, Prismatic Ltd. Its flight trials were successfully completed at the Royal Australian Air Force Woomera Test Range in South Australia.

“To go from design to flight in less than two years shows that we can rise to the challenge the U.K. government has set industry to deliver a Future Combat Air System within the next decade,” said Ian Muldowney, engineering director at BAE Systems.

Additional test are scheduled for later this year, with plans to enter initial operations with customers within 12 months.

Airbus is among companies competing in the high-altitude, long-endurance category of planes, and in 2019 completed a 26-day test flight of its solar-powered Zephyr S “High Attitude Pseudo-Satellite.” 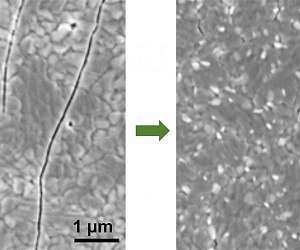 A new study reveals good news for the possibility of using perovskite materials in next-generation solar cells. The study, published in the journal Acta Materialia, finds that though perovskite films tend to crack easily, those cracks are easily healed with some compression or a little bit of heat. That bodes well, the researchers say, for the use of inexpensive perovskites to replace or complement pricy silicon in solar cell technologies. “The efficiency of perovskite solar cells has grown … read more

How light a foldable and long-lasting battery can be?
Researchers virtually 'unwind' lithium battery for the first time
Virginia’s 100% RPS bill heads to governor’s desk